I was feeling in the mood for something quick and a bit cute before a few books that were likely to take a bit more time to complete, so I settled on K-ON! Volume 3. It was a good thing too, considering that I ended up heading home early from work feeling thoroughly ill and miserable. 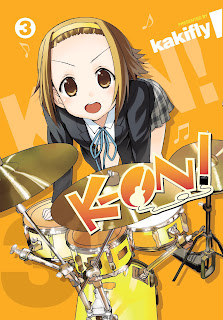 K-ON! Volume 3 picks up from where the last volume left off, with the majority of the Pop Music Club's members finishing their second year and entering their final year of high school. With graduation looming, Yui, Mio, Ritsu and Mugi have to start considering where they want to go for university, while Azusa has to face the prospect of being the only remaining member come the start of the next school year.
As I haven't been feeling great today, it was nice to read something safe and predictable. If you've been following K-ON! so far, it's safe to say that you know how it goes now. There aren't quite as many jokes about eating cake instead of practising, but it's still more focused on the domestic than the music side of things. There's a sense of things starting to come to a close, as there's a lot of baton-passing shown, both inside and outside of the club. There's also a bit more focus on how it is run as a club, with more mentions of things like club budget and requests for things like air conditioning.
The characters are still great, and this volume the reader gets to see a bit more of some of Azusa's classmates. Ui's already been introduced in an earlier volume as Yui's doting and hyper-competent younger sister. A new addition to the cast is Jun, who really admires the club whilst they're on-stage, but can't bring herself to join as she thinks that they're a bit lazy and embarrassing day-to-day.

If you like the previous two volumes of K-ON!, it's a pretty safe bet that you'll like the third. A bit more of a focus on the actual school side of things, and more of a spotlight on characters that are likely to join the club once the older members leave for university. 4/5

Next review: Under Ordshaw by Phil Williams

Banebringer by Carol A. Park

Returning to TBRindr, I settled on Banebringer, the first in what looked like a fairly grimdark series, with some cool magic and monsters. I've been on a bit of a roll with my grim books, so I was quite looking forward to this one. 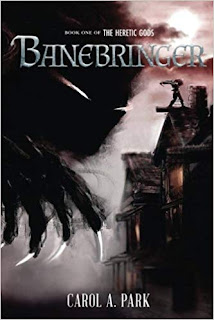 In the world of the Heretic Gods, the eponymous Banebringers are reviled as worshippers of heretical gods and summoners of the predatory monsters known as Bloodbane. Vaughn, an unwilling Banebringer of noble birth, is trying to have a low key life but finds himself hunted by his own father, obsessed with maintaining the reputation and influence of their family name. Not able to bring himself to kill his father, he appeals to the assassin Sweetblade, hoping that she might be able to do what he can't. Sweetblade has her own reasons for wanting Vaughn's father dead, but the risk of angering the power of the Conclave that he works for, and her own instant dislike of Vaughn might see the Banebringer sharing the same fate as his father.
There is a lot to like about Banebringer, but the two things that I'm going to focus on for this review are the magic system and the main characters. Magic in this world is primarily a Banebringer trait, which is activated by using up aether in their blood. Depending what kind of Banebringer the character is, this then activates their particular special powers, which range from invisibility to ice powers. And if a Banebringer is killed, it rips a hole in reality and summons a horrifying monster called a Bloodbane. So far so good. The thing that I really love about the magic system though, is that it develops as the plot goes along. A lot of fantasy series would probably look at that magic system and decide that it's good enough as is, but because a large chunk of the novel involves other Banebringers who are actively researching into how and why their powers work, the magic system continues to grow more complex and layered. I'd continue the series just to find out how far it can go.
The other thing that I particularly liked was the relationship between Vaughn and the assassin Sweetblade, revealed to be a woman called Ivana. The fact that they clash is hardly surprising, considering that Ivana is aloof and has a particular hatred of being propositioned, while Vaughn is an incurable flirt content to never settle for one woman. And of course, opposites attract, that I was expecting. What I wasn't expecting was the depth of feeling and consideration that each of them get over their separate character arcs, and certainly not the direction that it took in the end. And rather than feel cheated that my expectations weren't met, I'm eager to find out how their relationship progresses as the series continues because it still felt really natural and well-explored.
The only thing that I will say is that the rest of the world can feel a bit vague at times, with names of regions mentioned in passing, only to not be revisited, or certain racial traits skimmed over. Like I'm pretty sure that Ivana is meant to be black, but only because she briefly compares her appearance to someone else, and even then that's only a few chapters from the end of the book.

There's a lot going on in Banebringer, and a lot of questions that have been set up for later books. It's definitely worth a look for fantasy fans looking for something a bit darker, as well as those who want an in-depth, evolving magic system. The relationship between the two main characters is engaging, their "opposites attract" dynamic written with depth, maturity, and with a bit of a twist. The rest of the worldbuilding can seem a bit woolly at times, but it's rarely much of a distraction. 4.5/5

Next review: K-ON! Volume 3 by kakifly

Email ThisBlogThis!Share to TwitterShare to FacebookShare to Pinterest
Labels: Fantasy

I will admit to cheating a little with Heart-Shaped Box, as I had already read it several years before. It was my book of choice on a college trip to Berlin and I remember some good evenings spent curled up in a youth hostel scaring myself silly. But I'd forgotten some of the details of the book and thought that now would be a good time to remind myself of why I loved this book. 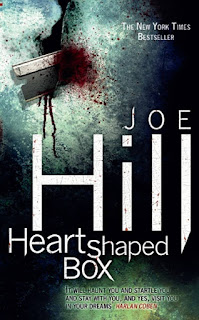 Heart-Shaped Box follows Judas Coyne, a middle-aged rock star who has gone into semi-retirement following the deaths of the majority of his band, and generally being tired with the whole business of being a rock star. He receives an email that says "Buy my stepfather's ghost". As he has a collection of the macabre, mostly consisting of twisted gifts from his fans, it seems like the perfect addition. But when the ghost is delivered to Jude, a dead man's suit in a black heart-shaped box, he finds that the ghost that he has allowed into his life had a grudge against him during life and is hardly about to let death stand in the way of his plans for revenge.
I really loved Heart-Shaped Box the first time round, and the second time was similarly entertaining. I will say during this second read, there were a couple things that stuck out as needing work that I didn't notice as a younger woman. But I'll start with what the book gets right.
Firstly, I personally really liked the main characters, Jude and Georgia/Marybeth. I've seen a lot of reviews that criticise them for being flat and predictable, but I think that's too harsh a line to take. Sure, ageing rock star and his significantly younger groupie girlfriend isn't exactly the most original of archetypes to run with, but I don't take much issue with this for a couple of reasons. First of all, you don't tend to get these character archetypes as the main protagonists, so I'm happy to switch focus to them for a while. Second, the development that they both go is pretty damn significant, even if it's kept a bit low-key compared to the whole "we're being chased by a homicidal ghost" thing. They go from being a pair of desperately unhappy people who are unable to deal with all of their emotional baggage to a couple that can last through thick and thin, knowing that there's someone who has seen them at their worst and decided to stick around.
The villain, Craddock, is a bit on the cartoonishly evil side of things, having pretty much no positive features either alive or dead, but then I think that's about right when it comes to the supernatural. For me, there is a big factor about a supernatural evil that influences how scary I find them, which is whether they can be reasoned with. It's the reason that I find zombies much worse than vampires. With vampires, there's the potential for a spark of humanity that can be exploited by the quick-witted to possibly get out of the situation alive. With zombies, there is no reasoning with them, leaving you with a zero-sum situation. Craddock has no positive qualities or virtues that can be appealed to and combined with his incorporeal form and eerie mind powers makes him a formidable foe.
The main issue that I had with Heart-Shaped Box in my second reading was that the really unsettling stuff seems to be in the first part, with each subsequent part getting less scary as it goes on. This could be because as they go on, Jude and Marybeth gather some additional tools to combat Craddock with. But then they also get increasingly on-edge and beaten up, so that sort of balances out. Part of it is probably that the character development does make up a big chunk of the road trip that takes up the latter part of the novel. But the thing that sticks out in my mind most is a scene right near the end of the first part which is just so fucked-up and creepy that pretty much everything after it pales in comparison. Afterwards the horror is more slow-burn, which only emphasises how good that shock to the system scare is.

I thoroughly enjoyed my second read-through of Heart-Shaped Box. While it does suffer scare-wise after having its most shocking and nauseatingly creepy scene fairly early on, the ghost is persistent and subtle enough that there is at least a decent amount of tension throughout. The main characters aren't necessarily the most original, but the personal development that they both go through is pretty damn good. I'd definitely recommend this for horror fans or maybe as a starting point for someone looking to get into the genre. 4.5/5

Next review: Banebringer by Carol A. Park