Along with Terry Pratchett's Discworld series, my fiance has been rather forcefully recommending that I get around to reading Jim Butcher's Dresden Files series. Fond as I am of him and willing as I would have been to take a look because of that, I had already been intending to read the Dresden Files as I had tried and failed to read Storm Front at least three times before I got to it this time. Nothing was going to stop me this time. 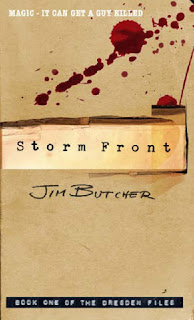 The main protagonist of Storm Front, Harry Dresden, is something of an oddity in his home city of Chicago. He is an openly practicing wizard, even going so far as to advertise his services in the local phone directories. While most of the people who call his office do so to find out if he's serious or not, he does indeed have some magical skill. So when he is called in by the police to consult on a grisly double murder, it means that something is profoundly unnatural about the whole situation. Having started investigating the crime, he finds that whoever is behind the crime doesn't want him to get any further, and they won't pull any punches in trying to impede his search.
I honestly have no idea why I couldn't previously finish Storm Front. There wasn't a single thing about this book that I disliked.
First, the main protagonist. Harry seems quite the likeable main lead, with an unusually grim backstory that we have only so far gotten hints of. He's very much an old fashioned gentleman type of character, willing to let his adversaries play fair before going in seriously, which is nice if occasionally frustrating. There are a few side characters introduced that I could see being quite important later on in the series, Karrin Murphy, Gentleman Johnny Marcone and Susan Rodriguez in particular, but because of the way that the plot proceeds it does become something of a one-man show. As such, I suppose it's a good thing that his character is so strongly written. Admittedly, I will say that his bad luck with women seems to be a bit arbitrary considering that from what the reader is shown, there isn't really anything that strikes me as obviously repelling about his personality. As such the vaguely romantic stuff does seem a bit out of place and not as confident really. I hope that he stays single for the rest of the series, because romance does not at the moment appear to be Butcher's forte.
As for the plot, it's a pretty solid crime story with a fantasy twist. While I wish that I could have learnt a bit more about where the magic in this universe stems from, so that I could get a better picture of what is and isn't possible for one wizard to achieve, I thought that what was included was pretty solid. Mostly it was stuff fairly familiar from European ideas of magic throughout history, things like the power of true names and casting spells using a person's hair or blood, but then the whole thing seemed to come together well enough that there wasn't much that needed reinventing. In particular I liked the potion-making scene, where the ingredients are more vehicles for symbols of what the potion should do than a specific recipe. I thought that was a nice touch. Additionally, I liked the hints of things that have yet to become important in the series. I'm told that some of these things get extra explanation and context, so I'll be looking forward to that.

A great start to a series, all things considered. Storm Front does well by creating a likeable protagonist and loading his world with all kinds of interesting magic that I am keen to learn more about. The writing does get a little clunky with regards to Harry's relationship to women and romance, so I'm hoping that further into the series Butcher either gets better at it or just abandons the romantic angle altogether. More than happy to recommend the series to fantasy readers or crime fans willing to suspend their disbelief a little further. 4.5/5

Next review: The House of the Dead by Fyodor Dostoyevsky

Now this was one hell of a nostalgic book to re-read. Wild Magic was a book that I first bought while I was in high school, and it has been revisited enough that the front cover is almost more crease than card at this point. After the intense and not wholly pleasant experience that was reading Stalkers, I needed something familiar. 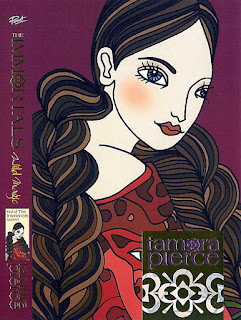 Following the deaths of her mother and grandfather at the hands of bandits, Daine Sarrasri decides to make a fresh start in the country of Tortall. Signing up with Onua, horse trainer for the elite soldiers known as the Riders, she soon finds that what she always assumed was a knack for dealing with animals may in fact be a magical talent known as Wild Magic. With supernatural creatures returning to Tortall and the threat of war from overseas, Daine must master her newly discovered abilities and confront the possibility of madness if she wants to protect her new friends.
I've had Wild Magic in my collection for around 10 years now and I've re-read it multiple times within that decade, so I'm hardly going to write a negative review of this. Daine is a wonderful main protagonist, both headstrong and willing to speak her mind, whilst still retaining the kind of uncertainty and lack of confidence that a lot of girls her age exhibit. It's nice that she just kind of falls into the whole role of hero, as opposed to actively seeking it like a lot of protagonists do. All she's trying to do is get by on her own and so her acquisition of power feels more like the kind of self-improvement that you naturally go through as you grow and mature.
Since animals are a big part of this particular series, I think it would make sense to briefly mention how they are depicted. There's very much an emphasis on people and creatures acting according to their inherent nature, and that comes out very well with the animals that turn up. There's a battle scene towards the end of the novel, where Daine is given a warning about encroaching enemies by a collection of bats, but when the other characters ask her to get some more precise reconnaissance she opts for consulting with owls, who are less naturally skittish. There's enough detail to make the animals seem intelligent in their own ways, but not to the point where they could be mistaken for human or supernatural characters. The exception to this is Cloud, Daine's mare, but then the two of them have been together long enough that Daine's magic has made a significant impact on the horse's mind. And Cloud is delightfully sarcastic and stubborn, so I'm not especially bothered by her unusually human-like intelligence.

Wild Magic is one of those books that I will always go back to when I want to read something comforting and entertaining. The characters are charming and likeable, the animals are portrayed really well, and it makes a great set-up for further adventures with Daine. 4.5/5

It's been a while since I've read any police procedural novels, mostly because my tendency when buying is to drift towards cosy or historical mysteries first. My mum, on the other hand, is very much a fan of police procedurals, so I ended up stealing this book off of her once she'd finished reading it. Which raises the question, have I been missing much in the genre? 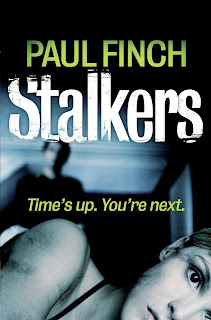 The last thing that Mark Heckenberg needs to hear from his superiors at work is that the case that he has spent years building is to be shut down. When said case could potentially find almost 40 missing women who had no reason to disappear, he is even more unwilling to just let this lie. So he ventures out on his own, soon attracting the attention of Lauren Wraxford, the ex-army sister of one of the missing women, who forces herself into his investigation. Unfortunately, his investigations also attract the attention of the dangerous group responsible for these disappearances.
Right, so I have some mixed feelings about this. On the surface, Stalkers is a very competent thriller. It has a tense premise, with some very intimidating villains and the tension is kept high throughout. I guess the thing that kind of bothers me about Stalkers is the way that the subject matter is handled. You find out pretty quickly that the women abducted by the main villains are targeted to be raped and murdered, after being picked out by a rich man close to them. Considering how sensitive a subject rape is, and how often it involves specifically female victims, it has a weirdly "she had it coming" vibe at times. While the rapists involved are rightfully depicted as the scum that they are, the victim that the narrative follows at first has a line of thought that is distinctly male. She's going through her daily routine and thinking to herself how fortunate she is that she can rely on her looks to put her above women who are just as qualified as she is. Speaking from my experience, that does not sound believable. Women don't really think in that way, and honestly, if a woman is attractive enough to garner sexual attentions from their boss or coworkers, that shit is often entirely unwelcome. For the victim to be portrayed even slightly okay with her male coworkers leering at her invites the reader to think that she unwittingly encouraged her attacker. That will never be an acceptable attitude for me. So while Stalkers does get a lot right, I can't wholeheartedly recommend it, because it introduces an element of grey into rape, which should be as black and white as it gets.

While technically a good thriller, it portrays the victim as "encouraging" her attacker, and for me that just isn't acceptable. Maybe you might be able to overlook that, but it just leaves a bitter taste in my mouth that ruins what would have been an otherwise tense thriller. 2.5/5