Some Girls Bite by Chloe Neill

After Ringworld, I needed something lighter. I figured that Some Girls Bite would be just the antidote I was looking for, the kind of trashy novel that doesn't require a lot of thought and can act as a kind of recharge period. While it did act as a recharge period, my initial opinion was perhaps a bit harsh. 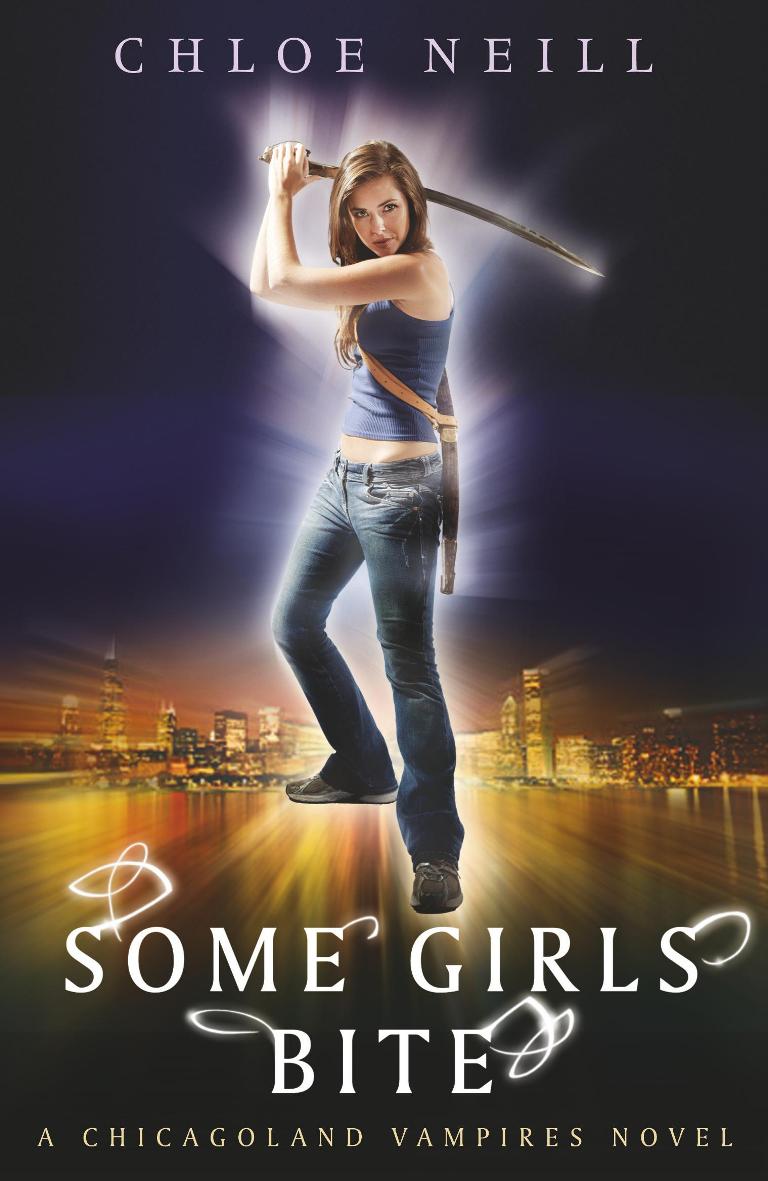 Some Girls Bite follows Merit, a graduate student who is changed into a vampire after she is nearly killed after an attack by an unknown vampire. To say that she is unhappy about this turn of events would be an understatement; in fact, having been torn away from her contented life of research and academia, she is determined to hate the one who forced the change on her, a master vampire named Ethan Sullivan. This is only complicated by some serious sexual chemistry between the two of them and his expectations regarding her unquestioning loyalty and gratitude. When she finds out that she is only one of a series of women attacked by vampires, however, she finds that she may well be safer in allying herself to Sullivan, as well as a few other supernatural allies, as she tries to figure out who tried to kill her.
From the description, this sounds like it's going to be your standard trashy vampire romance novel. And initially I was fully expecting it to unfold in the exact way these books always unfold. I was pleasantly surprised. The cliched route to take would be for there to be the alpha male vampire with either a wilting flower needing his firm but tender touch to guide her through this new world, or with a fiery sarcastic minx who would challenge him at every turn but eventually be melted by his somewhat dubious charms. In some ways Merit and Ethan fit the second mold, with one rather important difference: their affair fails to start. Fairly early on, Ethan manages to essentially ruin his chances of getting together with Merit precisely because he is a fairly standard alpha male "romantic" hero; by insisting on asserting his superiority, he pushes her away because, in the long run, that just is not something you want to have to deal with. There's chemistry, but Merit knows full well that chemistry alone won't make a relationship work if there's such blatant power issues and obviously different agendas between them, and that was really surprising and pretty damn cool. It's the main good thing that I brought from Some Girls Bite. The other main thing that the novel pulled off well was the characterisation and relationships between Merit and her friends, with Jeff, the flirtatious, if utterly hopeless, shapeshifter being a particular favourite of mine.
But, of course, few books are perfect. If it were perfect, I would be having the equivalent of a stutter right now. There are a couple things that were just kind of average, where they could have been really interesting. First, the world-building needs some work. It's your standard urban fantasy world where if you can think of a humanoid supernatural or mythical creature, then it exists. It also does the whole "vampire coming out" thing, which has been done to death by now. There's the hint of interesting politics, not only between vampire houses but between vampires and other supernatural creatures; unfortunately, it's frustratingly vague in this book, and after the intense world-building in Ringworld, it's all the more obvious. Additionally, the mystery isn't all that well developed. For one thing, most of the book is focused on Merit's attempts to fit into this new rigidly hierarchical society, with the murders being almost a side issue. Also, after a certain point in the book, the culprit becomes disappointingly obvious after one of Merit's friends makes a prophecy regarding what the fallout of the murders will be; seeing as the person being hinted at isn't going to be Merit, there's only really one person who fits the bill otherwise and the big reveal at the end fell a bit flat. Admittedly though, it has set up an interesting set of circumstances for book number 2 in the series, so I'm curious to see where it will go.

Overall, an above average vampire novel. I know, all the ones that I've picked up seem to have been above average; either I'm just easy to please or I've been lucky so far. An interesting subversion of romance tropes and good characterisation is brought down by vague world-building and a subpar mystery. I'd still be interested in reading the next installment though. 3.5/5

Next review: The Two Gentlemen of Verona by William Shakespeare

Right, so, first review of the new year. Hopefully I should be more prolific this year, but considering how long I took with this one, that could be high hopes. Anyway, Ringworld was practically forced on me by my fiance, who is very much a fan of the world-building style of science-fiction novels. Me, not so much, but I agreed to read it because I do find them as a whole interesting, if not wholly satisfying. So how did this measure up? Ringworld for the most part follows Louis Wu, a human who is contacted by a Puppeteer, a creature long absent from all of known space, who needs him for an intriguing mission. His experience of exploration will be combined with the resources provided by the Puppeteer, named Nessus, as well as the combat skills of the tiger-like Kzin known as Speaker to Animals, and the supposed luck of a human named Teela Brown; with these qualities, they intend to examine and potentially explore a strange structure dubbed the Ringworld. As you can probably tell from the cover there, the Ringworld is an artificial structure built within the Goldilocks zone of a yellow star, creating a living space that is just about incomprehensible to the human mind. Their plans are quickly thwarted by a strange set of circumstances and they must deal with each other's secret agendas and the unknown surface of the Ringworld.
From the synopsis, this all sounds too good to be true. It kind of is. I'll talk about the good stuff first. For one thing, it is a very thought-provoking book, with concepts of future technology and the process of moving out into unmapped territory all very well fleshed out. The group dynamic between the war-like Speaker and the cowardly Nessus, and the humans who try and balance them out, is engaging and progresses in an understandable and logical way. And the overall plot is generally easy to follow, despite the occasional bit of technobabble that can seem a bit overwhelming at times. So there's a lot to like and recommend this for.
That is, before I get to the negative aspects, which may well be a game breaker for some readers. Firstly, although I praised the group dynamic, I can't really deny that the group's consistency and logical development largely hinges on the characters not really being much more than a 2D concept. For example, if somoene had told me that Speaker was meant to be a Klingon, or any of the other alien races that have been created as war-like but honourable, then I would believe them pretty damn quickly. Nessus is a perfect example of a cowardly race most concerned with safety, despite being touted as one of the "insane" ones. Teela, the supposedly lucky one, is characterised by her near horrifying lack of knowledge about pain and sadness. Louis, despite being the point-of-view character, felt kind of like a void of personality, doing things simply because it was the mid-point between the beliefs of Speaker and Nessus. Each gets some development, but never enough to make them feel fully fleshed-out or believable. It's like putting paper cutouts on an immaculate oil landscape and expecting the audience to buy that the two things were given the same amount of effort and time. As a result of this, I kind of felt that some of the moments in the book that should have been really important and awe-inspiring just fell flat, simply because the characters didn't have enough character to impart the impressive nature of what they were witnessing. Secondly, while most of the concepts introduced were things that I could accept within suspension of disbelief, there was one thing that seemed strikingly out of place. The flying motorcycles that could dispense food and water? I could buy that. An artificial day/night cycle created by metal plates between the Ringworld and the sun? Sure, that makes sense. The evolutionary path of the Puppeteers? No, now that's just silly. For those of you interested, take a look at what they're supposed to look like. So, the Puppeteers. A three-legged, herbivorous race with two heads that act as eyestalks/hands and a large hump on their backs concealing their brain. I cannot, for the life of me, conceive of an environment that would allow for such creatures to evolve in the first place, let alone become the dominant species of their planet and achieve space travel. I'm all for aliens that don't just look like humans with face-paint (see the Turians from Mass Effect, my favourite alien species, as an example), but there is a point where you have to stop and ask "No, really, how is this a thing that people take seriously?"

In conclusion, Ringworld is a novel that is primarily aimed at people most interested in comprehensive world-building, ignoring the absurdity of the Puppeteers. The characters are suitable for their roles in-universe, but they never come into their own; for me this was disappointing, as it made the tension disappear completely and I couldn't quite bring myself to be wholly invested. Definitely one for when you're in a thinking mood. 3.5/5

Next review: Some Girls Bite by Chloe Neill