Men at Arms by Terry Pratchett

After the ludicrous time that I had reading Demons of the Ocean, I fancied going back to something a bit more familiar. Discworld it was then. About as ridiculous, but actually on purpose, so it almost doesn't count. 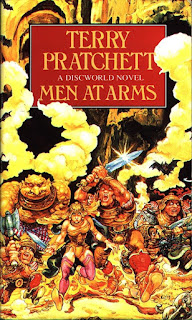 Men at Arms returns to Ankh-Morpork's City Watch at a rather strange period in their history. In the lead-up to his wedding/retirement, Sam Vimes has to deal not only with three new recruits (Cuddy the dwarf, Detritus the troll and Angua the w-(oman?)) that the Watch has been forced to take on to improve their ethnic diversity, but with a series of strange events that the Assassins' Guild have been very keen for him to ignore. As tensions rise between guilds and between species, the Watch have to find out what they intend to be when times are tough.
I loved Guards! Guards!, so I was really looking forward to Men at Arms and I was not disappointed in the slightest. Perhaps the thing that surprised me most was the unexpected moments of seriousness that are sprinkled throughout. Rather than feeling out of place though, they give the members of the Watch a lot of depth and nuance that was mostly missing from their previous instalment; the only aversion to this is Corporal Nobbs, who does get development only for it to make him more absurd. In particular I liked the development that Carrot received, who has mostly gotten past his naive veneration of the law and is now sly enough to follow those laws closely enough that it puts a spanner into everyone else's plans. At the very least, it was entertaining to watch. There was a bit of development for Vimes that I liked more, but it does have to be seen first-hand really.

A vast improvement on Guards! Guards! and that's saying a lot coming from me. I have a feeling that the City Watch books could become my joint favourites with the Witches. 5/5

Next review: The Orange Eats Creeps by Grace Krilanovich

Demons of the Ocean by Justin Somper

Before we start, I should admit the main reason I was looking forward to reading the first in the Vampirates series. I saw the combination of vampire and pirates, and proceeded to giggle like a particularly excitable schoolchild. That combination had the potential to be metal album cover levels of dorky cool, so I was quite looking forward to it. And then my husband, who had previously read pretty much the whole series, described it as "an earlier version of Twilight, but moreish". And I was instantly very conflicted. 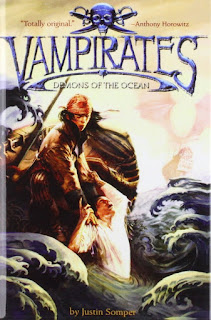 Demons of the Ocean follows twins Grace and Connor Tempest, the oddly-talented children of an enigmatic lighthouse keeper. After their father's death leaving them homeless and penniless, the twins decide to steal their father's repossessed boat and take their chances out to sea. They are soon caught and separated in a storm, rescued by two separate ships. While Connor finds himself on the ship of an infamous pirate by the name of Molucco Wrathe, Grace wakes up on a ship where none but the captain walk upon the deck during daylight hours. Traumatised by their separation, the twins aim to reunite.
This is such a dumb book. I can see why my husband compares it to Twilight, as it does feel very much like fanfiction. The main issue that I have with the Vampirates series so far is that it seems very confused about what time period that it wants to be. So it's supposed to be set in the 26th century, but there doesn't seem to be any kind of attempt to capitalise on the kind of advanced technology that should be available. Instead, there seems to be a weird mix of mundane current-day technology like diver's watches and an overwhelming amount of things that would fit better in the golden age of pirates, like swords, galleons and ridiculous amounts of booty. All I wanted was for the book to settle on a time period and stick to it. If everything had been set in piracy's golden era, that would have been so much easier and wouldn't have had to change a great deal.
Despite the weird time setting inconsistencies, it was surprisingly entertaining. It's still incredibly dumb, but a fun kind of dumb, like a B-movie. It's full to the brim with stupid concepts that just about made me cry with laughter. Pirate academy, anyone?

Not the smartest of books and could have benefited from just transposing everything into the golden era of piracy to simplify all of the weird time bullshit that it has going on. Despite that, it's entertaining enough and will probably distract kids nicely. 3/5

Next review: Men at Arms by Terry Pratchett

While not as draining as Blood Meridian, I did feel in need of something lighter and fluffier after finishing True Grit, and so I went to the same source as I did for the former novel. K-ON! is pretty much the apex of cute, funny shenanigans with a minimum of plot, so it seemed like the perfect thing to dip into to rest my brain a bit. 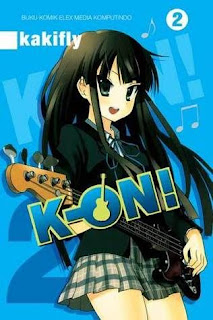 With a new volume comes a new character. Azusa Nakano is an aspiring guitar player who decides to join the Pop Music Club after hearing a recording of the club's first concert. She is particularly keen to meet the lead guitarist of the group, as she was really inspired to meet a musician of such skill. How will she react when she sees how the group truly is?
So the obvious thing to mention is that if you didn't like the first volume of K-ON! then there is little chance of you enjoying the second, because it's very much more of the same thing. There's jokes about how the club seems to be more an excuse to drink tea and eat cake. There's jokes about the teacher being less mature and weirder than she wants to be. And then there's Yui's weird propensity for either excelling or failing spectacularly depending on what it is that she's concentrating on at that point in time. It feels very comfortable, if that's what you're looking for.
The main difference for this volume is the addition of Azusa, a first-year to the main group's second-years, and she feels like a definite breath of fresh air. She's kind of a nice foil to both Yui and Mio. With Yui there is a brewing rivalry of sorts, as while Yui is spacey and doesn't know the specific terms for musical techniques, she does have an uncanny ability to pick them up enviously quick. And with Mio, there seems to be more of a traditional senpai-kohai relationship, except that they're both so adorably dorky and awkward that it's an incredibly bumbling example of the relationship. Azusa's presence does also mean that there are a few more scenes that focus on them practising and performing, which is nice.

All in all, if you weren't keen on the first volume, this second one provides more of the same. A new character and some additional focus on the musical side of things is nice, but you definitely know what you're getting when you read K-ON! 4/5

Next review: Demons of the Ocean by Justin Somper

I'd mainly heard of True Grit from my dad. See, he's a big fan of both John Wayne and the Coen Brothers, so he was quite keen on both movie adaptations. When I got this as part of a bundle, I wasn't sure how I'd find it, as until recently I hadn't really read any westerns before Blood Meridian last month. I had heard good things about True Grit though, so I went in hopeful. 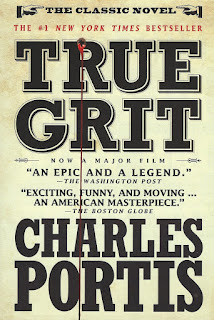 True Grit follows Mattie Ross, a 14-year-old girl who travels to Fort Ross upon hearing that her father has been shot and killed by his hired hand, Tom Chaney. Determined to avenge her father's death, she hires Rooster Cogburn, a deputy marshal known for his meanness and quick trigger finger, to help her find Tom Chaney and bring him to justice, either by the hangman's noose or at the end of a gun.
True Grit would be a fairly straightforward revenge story if it weren't for the fact that Mattie has such a distinct and interesting voice. For a 14-year-old, she is strong-willed and no-nonsense, with a particularly good mind for business. It's refreshing to see a character that in any other book set in the era would be meek and timid, and they're powering on ahead, taking absolutely no shit from anyone. It gets her in trouble, because of course it does, but she's all the more interesting for taking this strength/weakness to its logical conclusion.
The setting is definitely less bleak than the one presented by Blood Meridian, but the violence depicted stands out a lot more comparatively. It comes as more of a surprise when it does come, highlighted in particular by Mattie's comparative naivety. It ends up being a mid-point between the sort of heroic cowboy narrative that my dad grew up with and the unrelenting "humanity is scum" viewpoint that Blood Meridian settles on. There are clear distinctions between who is "good" and who is "bad", but there's a definite moral flexibility that can be seen in the characters, especially Mattie's reluctant travelling companions.

Despite my initial concerns, I found myself falling almost instantly in love with Mattie and her no-nonsense attitude. I would definitely give True Grit a read if you're looking to try out the Western genre, as it seems to be a nice middle ground between unrelentingly bleak and entirely ignoring the negative aspects of Reconstruction America. 4.5/5

Next review: K-ON! Volume 2 by kakifly